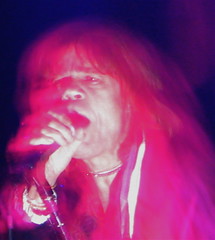 David Johansen swung into Babylon on Friday night at Irving Plaza, the dank old Polish Army Veterans headquarters that has stood at 15th Street and Irving Place since 1914 – or about as long, in living memory anyway, as Johansen’s grinning Our Gang mug has looked out over New York audiences with that front stoop familiarity that makes him the living dean of local front men. Johansen turns 58 next week and over the last couple of years has added yet another persona to his long career of poses – the old glam star who put the remnants of the band back together, one more time.

The band is, of course, the New York Dolls, a veteran team where the dead members outnumber the living originals by a score of 4-2 and where the term “creative hiatus” stretched to three decades. Now they’re back on the circuit – three years after their reunion concert and the almost-immediate death thereafter of bassist Arthur Kane from leukemia, and a year removed from the release of the big comeback record One Day It Will Please Us to Remember Even This. In their hour-plus shows these days, Johansen and his lone surviving bandmate, the former taxi driver Syl Sylvain, belt out a tight and pleasant variety of old “hits” – if the Dolls can be said to have had them – and new numbers, which are far better than old fans expected them to be. The new band includes veteran session guitarist Steve Conte, bassist Sami Yaffa (formerly of Hanoi Rocks), and drummer Brian Delaney.

But in truth, it’s a David Johansen gig – and, I suspect, an attempt by an artist of some real repute and accomplishment to capture a measure of the historic role for his band and their work that he undoubtedly believes they deserve.A couple of years ago, I wrote about Johansen’s long career, and I think the overall point still holds up. Here’s some of that retrospective:

David Johansen came in from the cold, sauntered to the bar just inside the door of The Bottom Line, leaned back, and raised his dark sunglasses just enough to gauge the size of the crowd for the second set. He cast a quick, professional’s eye on the audience – about three-quarter’s full, age range 30s to 50s, with a decided paunch and an air of disposable income. Satisfied, he dropped the shades back over his eyes and glided back to the dressing room. Later, he sat with complete comfort and nonchalance in an armless bistro chair on the edge of the stage, plunking clumsy 7th chords on a smooth Martin D28, fronting perhaps the tightest band of his long, quirky, and distinguished musical career. Together with the Harry Smiths, he ran through 90 minutes or so of American blues songs, from the Delta to Chicago to Mercer Street. His hair was long, and he sported a ratty beard. The old personae were nowhere: the vamping lipstick killer New York Doll, the happy slimy loungeman Buster Poindexter, the gliding bandleader Mick Jagger wannabe of the David Johansen Band. Every few songs, he pulled out a small brown bottle and threw down a quick slug.

“Saint John’s Wort,” he croaked, with the same crooked grin and unchanging Staten Island croak that has charmed New York audiences for more than three decades. “Gotta keep my spirits up.” 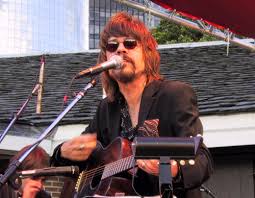 That was six years ago, while the Bottom Line still breathed and Johansen was soaking up the critical success (and small sales) of the first of his two roots records with the Harry Smiths – David Johansen & The Harry Smiths

. It was indeed a brilliant recording, bringing the snarl and staged boredom of Johansen’s New York roots to rural blues music. I nearly wore the thing out on CD, and even now, it’s in heavy rotation in the blues folder of my trusty iPod. From Lightnin’ Hopkins‘s “Katie Mae” to a new cover of Sonny Boy Williamson‘s “Don’t Start Me Talking” – a quarter century after the Dolls punked it up – Johansen and his sidemen gave straight but stylized version of songs that showed complete mastery of country blues in an ode to the man who produced the landmark Anthology of American Folk Music. (A second volume, Shaker

, was just as good).
But the boy always did have taste.

– which might well have been named “Straight Outta Staten Island.” The Dolls mixed a healthy disregard for the excesses of rockstardom in the early 70s, with a taste for Chuck Berry, Sonny Boy Williamson, and other greats. They dressed like chicks, owned downtown, fought, did drugs, and rebuilt a dead New York City music scene almost single-handedly. Their sound was driven by Johansen’s vocal and stage presence and Johnny Thunders insane bouffant Puerto Rican Jimi Hendrix guitar persona. Together, they were the Jagger-Richards of Mercer Street. But within three years, they were gone – in quick, ugly fashion – their second and last record, the aptly titled Too Much Too Soon

serving as a sloppy swan song. 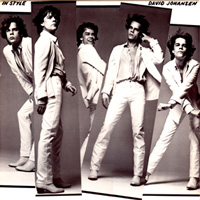 As the Doll with the most saleable personality and business sense, Johansen quickly moved on, capturing ever larger audiences with the David Johansen Band. By the late 70s and early 80s, he was filling downtown caves like The Ritz, hanging off the stage like a cab-driving Stephen Tyler, howling “mah people, maaaah people,” to 1,500 Heineken-sucking bridge and tunnel kids every evening. The high point was opening the chaotic Who-Clash Shea Stadium show in 1982. But the chameleon continued to change. That same year, in the basement of the since-toppled Ferris-Booth Hall at Columbia University, he rolled out a new character – Buster Poindexter. The lounge lizard act sold well – who could forget the good times at Ceasar’s Palace and the prime time of Dick Clark’s Rockin New Year’s Eve. Yeah, it was a scam – but Johansen still explored some interesting musical territories while counting the cash. And his band for much of the era, the Banshees of Blue, featured some terrific talent – the effervescent Tony Machine, and vocalists Soozie Tyrell and Patti Scialfa, later Bruce Springsteen’s wife/bandmate. When it played out, Johansen let his hair back down, and sauntered back into the blues singer role.

And that’s where he belongs – from the start, Johansen has always plumbed the blues, whether the up-tempo rock of Chuck Berry and Bo Diddley to the country blues of Furry Lewis, Charlie Patton, and Lightnin’ Hopkins, to the exhuberant hits of Wilson Pickett and the Four Tops. The man’s got an ear.

There is a strong case to be made that Johansen’s remarkable career deserves a larger audience, and more acclaim – that over more than 30 years, he has achieved “renaissance man” status among New York’s teeming mass of media and entertainment hopefuls. He’s flirted with the movies, landing character roles in other people’s star vehicles – the ghost of Christmas present in the Bill Murray

vehicle Scrooged, goofy cop Gunther Toody in Car 54 Where Are You, and Richard Dreyfus’ sidekick in Let It Ride. There have also been lead and supportive roles in a slew of independent movies, leveraging Johansen’s permanent stature as a downtown icon. Johansen is also a painter of some repute – “painting helped me from going nuts and drinking myself to death” – and critical winning praise for expressions that “fall between between primitivism and sophistication.”

And that pretty much nails Johansen’s musical career, the source of his true legacy. There are plenty of throwaways; post-Dolls, Johansen understandably made the big stretch for the big record sales. His biggest hit (as Poindexter) remains the ubiquitous wedding band number “Hot, Hot, Hot.” He never made the arena scene, but did score some serious Atlantic City and Las Vegas bucks. For my money, these are must-haves in the Johansen canon (in order of release):

– 1973 – A top 100 rock all-time rock album, the brief power of Johansen-Thunders et al is in full bloom of youth. “Vietnamese Baby” and “Jet Boy” are timeless personal favorites.Too Much Too Soon

– 1974 – “Babylon,” “Human Being,” and a handful of terrific covers. Great Shadow Morton production – it swings.

– 1978 – A brilliant entree as solo artist, some of the best songwriting of career, especially the nouveau Motown. “Cool Metro” is the standout rocker, along with classics “Funky But Chic” and “Frenchette.”

– recorded 1978 – Captures the post-Dolls excesses of the Johansen entourage, with guest spots by Dolls Thunders and Syl Sylvain.

– 1990 – The debut of the party bandleader, highlighted by the Furry Lewis standard “Good Morning Judge” and “House Of The Rising Sun” (and of, course, “Hot, Hot, Hot”).

– 1997 – Almost completely overlooked record, this is a wonderful record of original Latin tunes written by Johansen and Brian Koonin. Backed by the Uptown Horns, Soozie Tyrell, Tony Machine and others, the album is subtle, bright, and intoxicating – with some of the best melody writing of Johansen’s career. Faves: “Iris Chacon,” Mean Spirited Sal,” and “Let’s Take it Easy.”

– 2000 – Yet another persona is born, the white John Lee Hooker from Mercer Street. Just a brilliant record – gorgeous recordings of “Darling, Do You Remember Me?” and “Delia.”

– 2002 – Great follow-up, with renditions of “My Morphine” and “Kassie Jones” among other tasteful choices. The band – Brian Koonin, Larry Saltzman, Kermit Driscoll, and Keith Carlock – may be the best of Johansen’s career.

As Johansen enters his late-50s, where are the accolades? No tribute album, no David Johansen songwriters series on VH1, no all-star video concert, no Hall of Fame nomination. And while Johnny Thunders and Joey Ramone now score memorial concerts on a semi-annual basis, the very much alive Johansen continues to saunter on down the road. Summer before last, he grabbed the mic on a converted ferry out of South Street Seaport and sang the blues to Wall Street types and other youngsters on the Blues Cruise. It was a nice pick-up band – blues legend Hubert Sumlin on guitar, The Band’s Levon Helm on drums, Jimmy Vivino and Mike Merritt on guitar and bass. As we coasted under the Statue of Liberty, Johansen slipped into “I Can’t Be Satisfied.” It was the anthem of a blues sideman, who can’t do anything else.

Friday night at Irving Plaza – now renamed, strangely, Fillmore East – the new Dolls covered a bunch of the old Dolls, and Conte’s guitar licks punched home memories of Thunders better than Sylvain’s clumsy version of You Can’t Put Your Arms Around a Memory. They slid from there into Lonely Planet Boy, an old favorite, and it almost seemed like David Johansen was asking for the kind of late-career respect that other acts with lesser achievement and and influence have attained:

Cus I wanna be there witcha
And I know what to bring
I remember, from the days
You got over, everything

Note: the very cool picture up top came from the Flickr feed of Beth Conard. More cool pictures of the Dolls, and other stuff around New York here.

This website uses cookies to improve your experience while you navigate through the website. Out of these cookies, the cookies that are categorized as necessary are stored on your browser as they are essential for the working of basic functionalities of the website. We also use third-party cookies that help us analyze and understand how you use this website. These cookies will be stored in your browser only with your consent. You also have the option to opt-out of these cookies. But opting out of some of these cookies may have an effect on your browsing experience.
Necessary Always Enabled
Necessary cookies are absolutely essential for the website to function properly. This category only includes cookies that ensures basic functionalities and security features of the website. These cookies do not store any personal information.
Non-necessary
Any cookies that may not be particularly necessary for the website to function and is used specifically to collect user personal data via analytics, ads, other embedded contents are termed as non-necessary cookies. It is mandatory to procure user consent prior to running these cookies on your website.
SAVE & ACCEPT